Back in 2005 I made a blog post about my hunt for Lancashire Oatcakes in the style I remember from my childhood. The closest I was able to get was a recipe for Staffordshire Oatcakes.

I tried that recipe, but it wasn't right. I tried modifications, but failed. My family began to tease me about my various efforts and failures.

Well, fast-forward to 2013 and the content of the Internet has greatly expanded.

First, there is a Wikipedia Oatcakes entry. As I noted earlier, there are distinct regional differences. Currently the article describes:


While Lancashire oatcakes are mentioned, there is no recipe. However, it does say they are: “...made without wheat flour or milk, and shaped as an approximate 11-by-6-inch (28 cm × 15 cm) oval, smooth on one side and rough on the other…” The physical description is exactly as I remember. The lack of wheat flour and milk clearly makes a big difference and explains why the Staffordshire oatcake recipes were not what I was looking for. On the plus side, the fact that there is no wheat is ideal as some members of my family need to avoid wheat gluten.

But where to find a recipe for the Lancashire style?

The Internet came to the rescue again. Now I have found this recipe:


Method:
Combine the oatmeal, yeast, sugar, salt and oil in a large bowl.
Form a well in the centre and add just over half the water. Stir to combine then keep adding water until you have a pancake-like batter.
Heat and lightly oil a frying pan then add 1 cup of the batter and cook for about 4 minutes per side.
Set aside to cool as you finish cooking the remaining batter. Either use immediately or dry to make 'hard'. These oatcakes will keep in the refrigerator for several days and freeze well.

I have found the same recipe on Celtnet and Lancashire Life. I usually make a half-sized batch.

The results have been quite good, but not perfect yet. In particular the appearance is wrong. Details of preparation seem to make a big difference.

The oatmeal needs to be ground very fine – the finer the better I have found. I use a kitchen machine on a high grind setting for a minute or so.

The recipe calls for yeast, but there is no mention of letting it sit first. Most recently I did so for two hours at room temperature, which seemed beneficial. Overnight in a refrigerator might be even better. I will have to experiment.

Then there is temperature. At first I tried cooking as I would a traditional crepe, but the oatcake never seemed to brown properly. I realized that crepes are cooked at a comparatively low temperature because of the milk and eggs in them – both of which burn easily. I had much greater success with a higher temperature; if fact, a very high temperature.

An important distinction of Lancashire oatcakes is that they are smooth on one side, and bubbly on the other. Reference is made to using a cast iron griddle or hot stone, not a modern non-stick frying pan of course. Significant mass to resist cooling as the batter is added should help.

So I was really pleased when I found pictures of the traditional Lancashire oatcake cooking process. www.oatcakebaker.co.uk is a gold mine on the subject:

“This site is about the Holroyd family hotplate bakehouse located at 6 Barkerhouse Road, Nelson, Lancashire, UK which made oatcakes, crumpets, pikelets and muffins between 1909 and 1984… The information included in this site is largely from the family albums and scrapbooks.”

A key element was an ‘oatcake throwing machine,’ patented in the 19th century. It is this device that creates the characteristic elongated shape, and which deals with the tricky issue of spreading the batter in a thin and uniform layer before it is placed on a very hot, hotplate with a shellac surface (to prevent sticking). 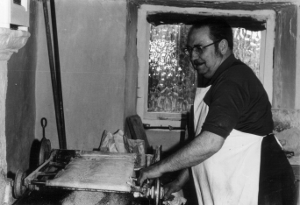 After the first side is cooked (the side that is smooth), “The oatcake is scraped off the face with a flexible knife about 40cm long by 5cm wide picked up by hand and transferred to the second hotplate.” This second plate is cooler, and the oatcakes appear to be left on it longer as there are 8-10 on it while there is only one on the first plate at any time. Reference to the large flexible knife or spatula solves another issue I found. The oatcakes are very fragile while they are cooking. Much more so than pancakes and crepes made with wheat – gluten helps bind them.

So I have some more experimenting to do, but I think I’m on the right track. The good news is that my family likes the recent results well enough to eat them now.