I recently change from editing HTML to using Blogger to author my weblog. At first I still had the site hosted by my ISP – Rogers Canada – that also provides our house cable service, including digital movies, as well as service for our four cell phones. I’ve had no end of problems with Rogers over the years, and they provide some of the worst service I have ever experienced from a company.

From a dispassionate marketing professional’s (something I am nowadays) view I can see a lot that they do wrong. While primarily an infrastructure provider, they originally teamed up with @Home to provide value-added services. When @Home flopped, they decided to offer comparable services – they promised a lot but delivered a much less and that at a much slower pace that they said. Obviously it was harder and more expensive than they thought. Now they have teamed with Yahoo in Canada, and are switching their users over to Yahoo for services. But again they promise things that they are not delivering and now are moving to shut off the remaining services they offered – like web hosting. I blew my top a few days ago and transferred this site to hosting by Blogger as well.

Meanwhile I’m investigating what options I have to get out from this ill-deserving, virtual monopoly.

…or more accurately, our jade plant does. I’m familiar with most typical house plant pests, but I hadn’t heard of fungus gnats until I did a little research. We’ve had some tiny flies living largely on the soil of a large jade plant, probably for the last two years. The plant hasn’t been bothered as far as I could see, so I haven’t done anything about it until now. They are tiny flies (as the name gnat suggests) and they live primarily on the fungus and organic material in soil. We’ve probably got them in all of out plants, but the jade just seems to be the most affected. Mind you, I had to wear my bifocals to get a good look at them…
You can get a good overview here: http://www.ext.colostate.edu/pubs/insect/05595.html
Lindy (my wife) suggested that may account for why our cats occasionally seem to jump at no apparent object – maybe they don’t need bifocals to see flying gnats! 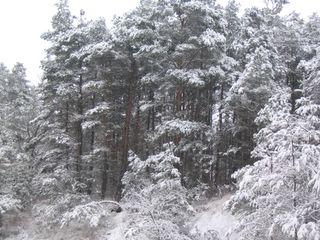 The winter wonderland that is our back garden

Posted by Unknown on Saturday, January 22, 2005 No comments: 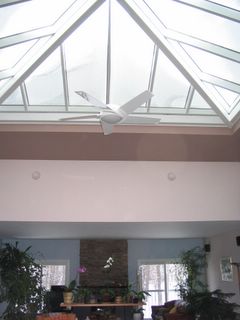 Posted by Unknown on Saturday, January 22, 2005 No comments:

I work in the software industry, and while the company that I work for has not moved much of its programming offshore to India or other ‘third-world’ countries, many have. A programmer in Bangalore is a lot cheaper than a programmer in North America.

I was watching a TV show this morning about a new concept city in Arizona – with a very small footprint on the environment (they claimed use of only 2% of the space to house the same number of people as would be the case in urban sprawl). The residents grow their own food, have small dwellings, live very close to their neighbours, and most significantly, there is no provision for cars. Many of the residents work at crafts: carpentry, pottery, metal working, etc. It would be interesting to know how their products compare to similar products coming from the third world. My point here is whether the alternate, low consumption lifestyle workers in North America have a similar cost base to people working in a third-world country providing similar products. Or is it still more expensive so that the crafts have to command a premium price?

What’s this got to do with programmers? Well, why is that most alternate lifestyle communities in North America have crafts as their major occupation. As long as there is electricity and a connection to the Internet it is perfectly possible to pursue a range of occupations from any location – which is exactly why outsourcing of services like programming from third-world countries is now practical.

So what does this mean? Well, perhaps if you are a programmer in North America, the best way to defend your job would be to move to an alternate lifestyle community.

But this is not just true of programming. Recently I heard that reading x-rays is increasingly being outsourced to qualified radiologists in India… Soon we may all have to change our lifestyle and job location in response to the emergence of third world countries.